In a pragmatic way, the recently published third edition of the book “Tug Use in Port – A practical Guide” pays attention to the interesting future of autonomous or remote controlled tugs – a good reason to pay more attention to this very specific subject while focusing on the period till 2050. 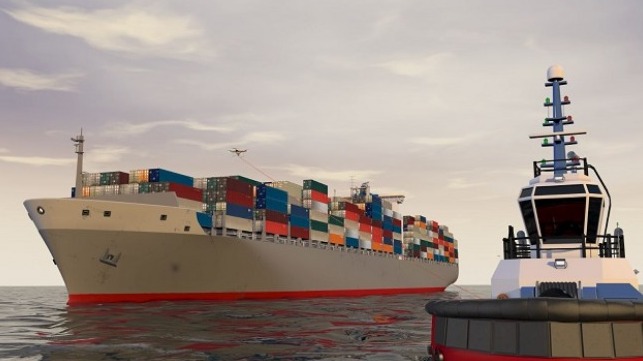 Almost daily publications appear about automation and autonomy in shipping. Names of large maritime industrial companies are often found in these publications, giving the idea that they are a major driving force behind these developments. The question can and should be asked, how relevant and realistic are these developments; are they generally applicable, for certain sectors or trades only, or perhaps not applicable at all?

For ship handling with tugs many elements are involved: the ports, the ships, the cargoes, pilots, tug boats, ship’s crew, etc. When one element changes, ship size for instance, it affects all other elements, such as ports, pilotage and tugs.

Several changes will take place in the coming years. To name a few:

• The total amount of cargo to be transported will grow steadily, as will be the case with the number of ships. There will be proportional changes in total cargo composition, for instance with oil and gas.

• Certain types of ships will have increased maneuvering capabilities to facilitate increased autonomy and/or will grow in size as is the case with container ships now.

• New types of transport are expected to be developed, for example regarding new, non-oil-and-gas-related offshore activities.

This all has its effect on ports and port lay-out and on the assisting tugs. Tugs should keep pace with developments in ships and will follow the path of automation too.

Challenges on the Way Towards More Tug Autonomy

A technical article (here) deals with the complexities involving free sailing and assisting tugs. For example, a tug operates in close proximity to a ship, and if the ship to be assisted is making way, interactions between tug and the ship play a curious role with varying forces and turning moments, which can quickly change, working on the tug. These interaction forces increase with the speed squared and with decreasing distance between ship and tug and vary by ship type, draft, trim and underkeel clearance.

This complex phenomenon can have a large effect on the relatively small tug. It can be particularly risky for the tug and its crew near the bow and stern of a ship if not adequately anticipated by the tug master. These interaction effects are difficult to predict and are hard to detect by a tug master. It will be a challenge to model these effects and cope with them when tugs are becoming autonomous. This could be achieved with machine learning. Once modeled, these interactions could more effectively be anticipated and even be used to advantage. On board the vessel, the tugs are added to the maneuvering control capabilities of the to be assisted vessel and fully integrated as an add-on capability.

On the way towards more autonomy, the present old fashioned system of using heaving lines to pass a towline from tug to ship, which includes serious risks for tugs and tug crews, should be replaced by a safe, quick and reliable connecting systems that can be used at relatively high ship speeds and be remote controlled. Various systems are presented to solve this problem, such as cranes, air driven pistols and drones.

In the medium term, an increase of autonomy and remote control of ships and tugs will be seen, but there will be a lot of variety in outcomes. In the longer term, this will be followed by an increasing number of ships and tugs operating either autonomously and/or remote controlled. Ships and tugs will at first still be (partly) manned. Later, manning will reduce depending on developments and experiences.In parallel there will be development towards ever safer tugs (for example the use of SaferVents, a system decreasing the risk of flooding), and cleaner and more economical engines for ship and tug propulsion.Furthermore, ports’ infrastructure will change, remote pilotage will increase and rules and regulations will be adapted.Ultimately the prospect of trade conflicts, structural shifts in economies, climate changes, etc may change the current outlook.